This time I just wanted to write down a recap of the problems I recently had with my OnePlus One. In general I am more than happy with the phone. I had to adjust a bit to the huge 5.5“ displaysize but the overall performance, the ingenious battery and the nice grip of the Sandstone finish conviced me to stickt to the OPO as my primary phone. Actually I exchanged mit Nexus 5 for the OnePlus One which is quite a statement imho.

Nevertheless I had some major issues regarding GPS connectivity in the last couple of days and it took me some time and effort, but I think I have found a reliable solution.

First of all: What was the problem?

A couple of days ago I noticed for the first time, that my fitness-app, Strava, didn’t record my jogging route. It was unable to pick up a GPS signal and therefor failed to record the route, distance and speed. After I rebooted the phone everything was fine again, so I shrugged it off as a one time failure but I kept it in mind.

A few hours later, the same game. GPS connection lost. First I tried the obvious things: downloading GPS Status Apps from the Play Store to download „assisted GPS data“ and optimize the GPS for my location. But no chance, I kept losing GPS connectivity with all apps stating, that there wasn’t even a satellite in view.

Here is an example of the GPS status after a fresh reboot and then a few hours later. Taken on the exact same spot 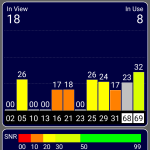 OnePlus One GPS Screenshot Before 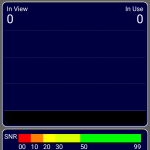 OnePlus One GPS Screenshot After

It looked like the whole GPS module was disabled and/or not functional.

I found a similar bug, the Bacon-115, in the CyanogenMod Jira Bugreports with a modified gps.conf that was supposed to help, but it didn’t. At last for me.

Then I tried to revert to a fully stock phone with Factory Image 25R and followed the official OTA Path up to the newest ROM with no success. I tried unrooted stock, rooted stock, original kernels, Franco Kernels r16-r18 and all different radio images I could get my hands on. No success.

But then I noticed something strange

Following suggestions from this XDA Board (there are a couple of threads in XDA and at CyanogenMod discussing various GPS problems on the OPO), I found out, when setting my phone to only use the 2G or Edge Network, the GPS fix stayed stable. Reliable fix for a whole day. But obviously sticking to Edge speed was not an acceptable workaround for my problem.

I wanted both, LTE speed AND a liable GPS location service.

So I started to look at the gps.conf file on my phone myself (rooted obviously, as the file lies within the protected /system/etc/ folder)

Anyway, when looking in the gps.conf I found two settings related to LTE network connection, the

and under „Extra Settings“ there was the option „SGLTE_TARGET=0“ the description „# Mark if it is a SGLTE target (1=SGLTE, 0=nonSGLTE)“

As I consider my phone and mobile contract a „LTE-Target“ I changed this setting to „1“ and the „LTE Positioning Profile Settings“ to 3 (as 0 clearly wasn’t working for me).

Saved the gps.conf, pushed it back to /system/etc on my phone and rebooted it.

To be honest, I really don’t really know exactly what these configurations do but what I do know, is that I have a stable GPS fix and a fast LTE connectivity since I modified the gps.conf as mentioned.

This configuration works like a charm for me on the OnePlus One on the latest ROM Version 33R (rooted) with Franco r18 Kernel (which you should definitively install if you can as it has a huge positive impact on the touchscreen behaviour. No more ghost-swiping or fasttyping bugs for me!)

Anyway, after a lot of tweaking, flashing and even wiping the whole phone several times last weekend, I now have the latest firmware, a very less buggy touchscreen and a fully working GPS. At least this works with my contract (I am on a Congstar Contract which allows me to use the T-Mobile LTE Network).

Maybe this is just a minor issue that effects only a few people, but to me it was a major pain in the ass and almost cost me a whole weekend to fix, so I just wanted to share my solution.

So if you have the same problems (GPS failing in connection to 3G/LTE network) maybe this gps.conf can help you out.

The whole file on Pastebin:

UPDATE – The conf above still gave me some problems. Right now I have a 100% stable GPS setting in the German T-Mobile Network with the settings in this

3 thoughts on “GPS Issues on the OnePlus One”

Iconic One Theme | Powered by Wordpress